After partying the night before with some friends from Cebu, I hurriedly went back to the hotel, took a shower and went straight to the Whale Shark Watching in Oslob, Cebu.

Whale Shark Watching in Oslob, Cebu has become popular recently since it is a guaranteed way to see the whale shark which also caused some controversy.

The local government of Oslob are trying to standardize the tour prices, improve the facilities and properly orient the tourists; however, they still have a long way to go to properly establish and implement the rules for whale shark watching just like in Donsol, Sorsogon.

How to Get to Oslob, Cebu

It is just easy to go to Oslob, Cebu. You just have to ride a cab from Cebu City to the South Terminal. From Crown Regency (where we stayed) to South Terminal, the fare is just about P60. Our taxi driver offered to take us to Oslob in just 1 hour but I think it is a bit absurd since Olsob is more than 110km away from Cebu City which mean he has to travel at 110km/hour..nice try Mr. Driver 🙂

Anyway, when you arrive in the South Terminal just go look for the yellow Ceres bus. The airconditioned bus in door 15 is the one going to Oslob. There’s also a non-airconditioned bus plying that route but I was advised by my friends that I should just take the air-conditioned bus so that I could sleep well and it is much faster since the bus won’t be making as many stops.

The bus fare is just P155 one way. You’ll just pay the amount to the bus conductor during transit. You don’t have to reserve tickets before hand since there is always a bus leaving every 15 mins. It is advised to take the 3am bus so that you could get to Oslob by 6am which is when the feeding starts and it is less crowded.

Don’t forget to mention to the conductor to drop you off on Tanaw-an, Oslob, Cebu.

The travel time to Oslob, Cebu takes about 3 hours. It is a pretty long ride so I used this opportunity to catch some sleep.

The driver dropped us in Aaron Beach Resort. I believe they’ll earn a commission for every passenger that they bring to the resort. 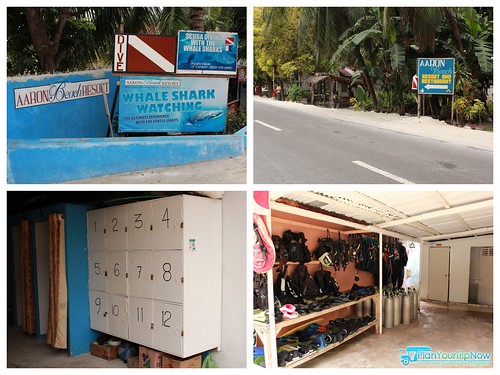 You can choose not to avail of this resort by just going directly to the Whale Shark Briefing Center. They also have public shower there. 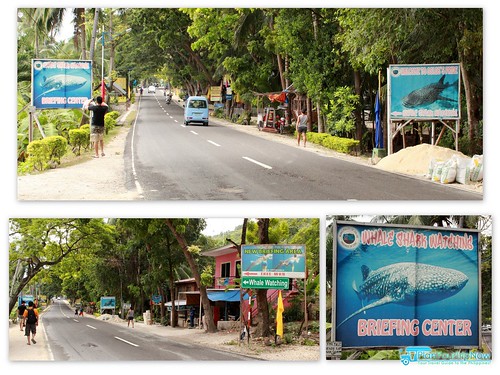 Whale Shark Briefing Center Oslob, Cebu. Ask the driver to drop you here if you don’t want to pay for the resort

The staff from Aaron Beach Resort greeted us and informed us about the price whale shark interaction package which is P500. This includes the short boat ride, 2 guides, snorkeling gear, cottage, shower area and locker to place your bags. If you don’t want to snorkel and just prefer to watch the whale shark from the boat, the cost would be P300. The whole whale shark watching would only lasts for 30 mins.

To get your pictures taken during the tour, you have to pay P500. They have their own underwater camera and you can choose to have them use your SD card or just get your copy of the pictures on a CD for P50. As a photographer, I would advise you to use a spare blank SD card or just pay for the CD since you don’t want to corrupt your SD card when you use it in another camera, not to mention that you’ll be submerging this SD card underwater and if something bad happens your holiday photos would also be gone. Just make sure to review the contents of the CD before leaving since you don’t want to get home and find out that the pictures in it are for a different group 😀

After we changed to our swim clothes, we rode a boat and they brought us to the Briefing Center so we won’t have to walk (and possibly to prevent us from getting the services  another resort).

In the briefing center, we just wrote our name and attended a very brief orientation. 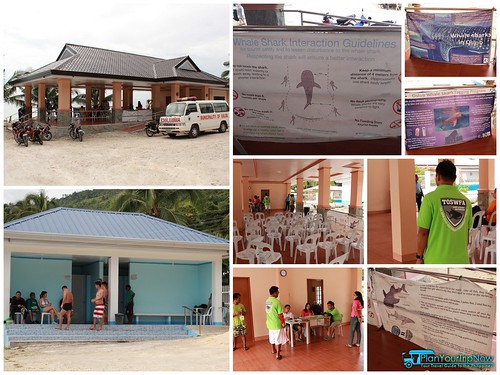 I’ve been to Donsol, Sorsogon which is another area to spot the whale sharks in the Philippines. The officials there are more strict and the orientation is much more comprehensive. You’ll have to watch a video explaining the rules for the whale shark interaction and the roles of the boatmen. In Oslob, the orientation just goes like this: A man stands in-front of you and tell you that you are not allowed to use sun block, you should be 4 meters away from the whale shark and you should wear your life jacket at all times. That’s it! It just took a minute to say that.

After wearing the life vests, we head out to the beach where our boats are waiting. The area where they feed the whale sharks is just a short distance away from the beach.

One guide would be the photographer and the other would be the one pushing you down (since you are floating) so you could have a good picture with the whale shark. There are smaller boats in the area and they are the ones feeding the whale sharks and guiding them to area where we are snorkeling.

The whale sharks are very huge! At first you’ll get scared and intimidated with their size, but as you go on you’ll get used to it and be more willing to have your pictures taken.

After the Whale Shark Interaction

We weren’t able to go to these places as we have to go back to the city immediately. But nevertheless, we are already feeling so accomplished to experience what we came for.

Going Back to Cebu City from Oslob, Cebu

To go back to Cebu City, you’ll just take the bus again from the National Highway. It’s just right outside the resort or the tourist center. The fare is still P155 and the last stop would be the South Terminal in Cebu City.